The Blue Chair in progress 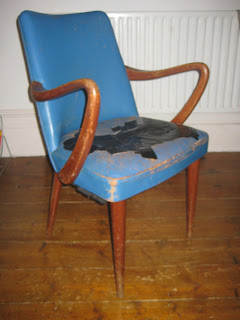 On new year's day I found a decrepit chair in the street but decided that it would make a great upcycling project. The arms are really lovely and I'm sure it could be totally transformed.

It's been sitting there ever since and I've been putting off starting on it as once I start something I'll steam ahead until it's finished. Now I'm two days into taking it apart, it's much more complicated than any of the furniture I've tackle before.

Day one I began prising the old leather cover off but, typically of me, without the right tools. It was firmly held in place with lots of rusty old tacks and I was using a fish knife to prise them off! I'm sure it's no surprise to hear that I eventually had to stop as my fingers were cut to pieces and my hands bruised. 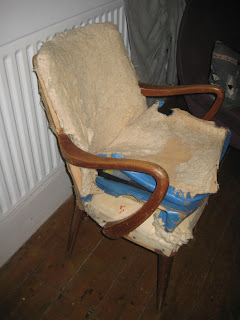 A day in between for recovery and the purchase of a proper tack removing tool, and I started again. Easier than it was, but still a tough job.

The leather of the seat and back just would not budge, I pulled it it tore and eventually the culprit popped out – this little plastic figure which had been wedged down the back of the charm between the timbers! (See how he's still gripping a piece of the seat foam in his determined hands!) 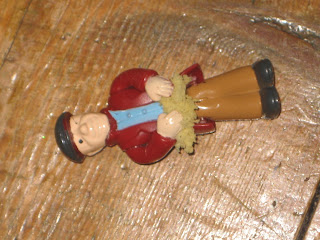 Now it's finally stripped down and the arms have had their first sanding. The next stage is a bit more sanding and them some Liquid Gold to restore the wood. Once that's dry I will be able to move on to the upholstery. 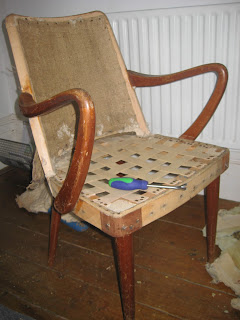