One for craft fanatics. Otherwise, nothing for you here – look away now. 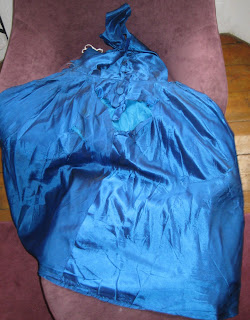 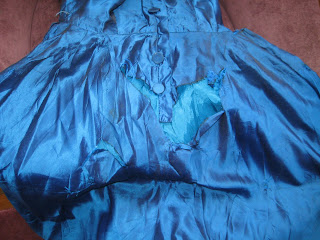 Last week at one of my regular markets, I unearthed this trashed 1950s blue satin dress.

I've no idea what on earth has happened to it, but the damage is akin to a cat sliding down a pair of curtains with its claws out. The front is ripped to shreds and the zip has been taken out of the back, leaving very little holding it together, but there were two glorious, sequin-encrusted, large patch pockets which I was able to get off in the nearest café using my Swiss Army knife keyring!

I'd originally thought about making a bag by sewing the two pockets together, but then decided a bit of garment customising was the order of the day. I found this heavy cotton sweatshirt dress in a sale, and not only is the sportswear-glam mix a tried and tested one, but the grey of the dress picks up the silver of the sequins and is much easier than trying to match that tricky blue.