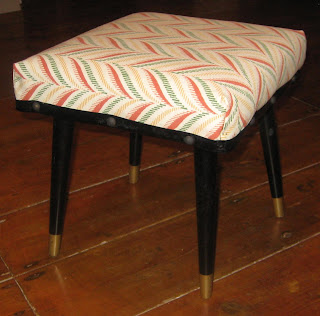 Half an hour to spare? Just enough time for a quick spot of upholstery then. 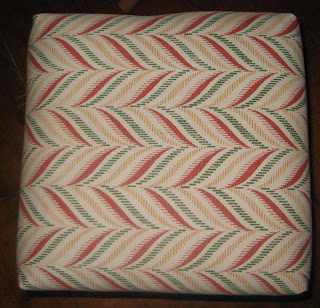 Posted by Carol Seatory at 14:28 No comments:

New work for the weekend 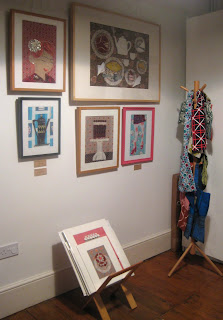 Glad tidings! Due to helathy sales, I have been able to hang some new fabric collages (and more unframed ones in the browser) in time for the last two days of the Open House at weekend. 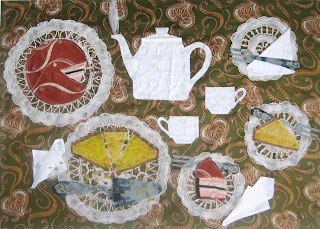 It's big picture and stretching that thin background fabric over the backing was very tricky. Now comes the even tricker part – getting it into the frame.

Cakes on the way

People so far seem unconvinced of The Good Idea that is making pictures of cakes out of fabric. Teapots worked, folks, why not cakes?

Undeterred, I'm three-quarters of the way through my third cake collage. This one's a large-scale teatime scene and I hope to be finished it tomorrow – it needs to be framed and on the wall in the Open House by Saturday morning! 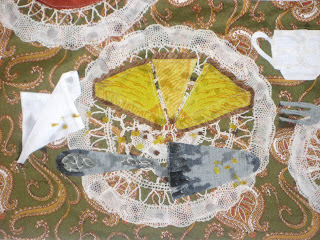 (Close-up of George's Famous Lemon Tart. Those splodges are the still-wet glue.)
Posted by Carol Seatory at 14:02 1 comment:

Fame beckoned, then it wandered off again

It's been over a month since my last post due to being manically busy with the Open House, http://www.ninebynine.org.uk/, but this evening a talk by Ameila, yes, THE Amelia, she of Amelia's Magazine, swerved as a timely reminder about the importance of the humble blog in the 21st century, so I'm back now.

What news then? Well, following an article I've had published online:

Inspiration for using vintage remnant fabrics | Make it and Mend it
www.makeitandmendit.com

first thing the morning after it went live I had a call from Hampton Court Women's Institute asking me to give a talk! (Miss Anne Boleyn would like to ask...) and a few days after that a production company wanted me to talk about appearing on the telly.

Now, the telly thing sounds interesting but they dumbed it down soooooo much, not only would it have been patronising for viewers, but dull for me too. They really thought no-one out there had the capability to make so much as a cushion; I beg to differ.

So fame will have to find me in other ways. Meanwhile, I'm busy with the Open House and making cakes out of old lace and doilies. Gotta go!